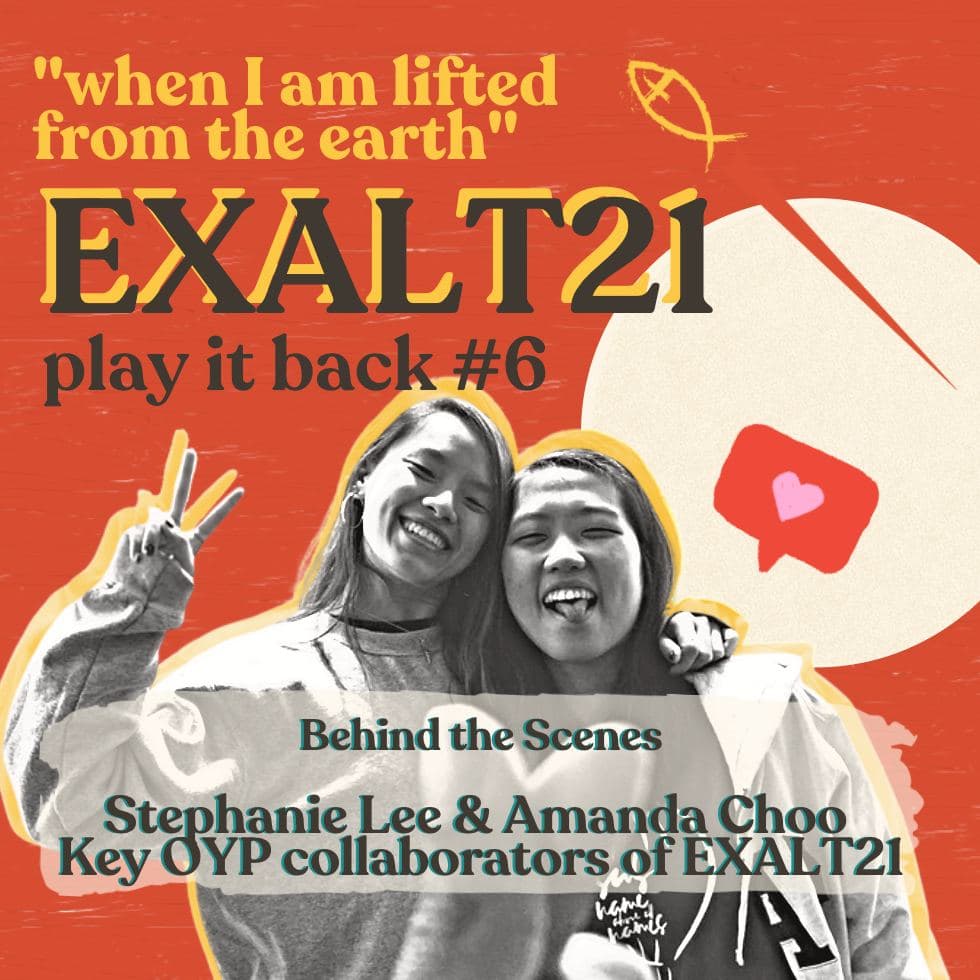 Behind the Scenes with Steph & Amanda

BEHIND THE SCENES – EXALT21

Isaiah 41:10: do not fear, for I am with you, do not be afraid, for I am your God; I will strengthen you, I will help you, I will uphold you with my victorious right hand.

In this Q&A, we ask Steph and Amanda (more affectionately known as “Choo”) their experience of being part of the planning committee of EXALT21.

For context, Steph and Choo were OYP’s key collaborators  who generously offered their time to be part of the planning committee, balancing their individual commitments (work for Steph, and school for Choo) with the planning of this massive event.

Read how God remained faithful throughout the process, pouring out grace upon grace into their lives especially in this journey 🙂

THE CALL | How were you first called to serve in EXALT21?

Steph: In 2019, I attended the Hillsong Conference in Sydney  – I saw the way that they chose to do things; they truly thought creatively. It was a very fresh perspective! It was 4 April when  Ju texted to ask if I would like to be involved in dreaming for EXALT21. This was an invitation to dream God’s dream for the Catholic Church in Singapore. There was no doubt that I was going to say Yes!

Choo:  It started with a simple ask from Ju if I wanted to help to “brainstorm for Catholic200SG”. Without really knowing what I was signing up for, I thought “why not, sounds fun and exciting” and said my Yes!

JOYS | What were your roles in the planning committee? What were the greatest joys of being in your role?

Steph: As part of the OYP team, I was in charge of production which involves planning and piecing together the different elements of EXALT21. The Office gave me a lot of creative freedom – to sit and pray and dream God’s vision. A great joy in my role is to impart God’s vision to those I worked with, and witness the dreams come alive through the service team. The service team really blew my mind – their willingness to so readily say yes from a place of love for Christ also shows me that God really raises up people for Himself. The joy of being in my role was witnessing their yes and seeing how God moves them.

Choo: I helped to coordinate EXALT21 publicity – so that covers taking care of the wonderful teams who created the website, our social media posts, the merchandize. But of course more came on the plate as things developed – I also helped out with session recording for the speakers, and the last and fun addition was working with the emcees! The greatest joys were being able to witness the mad talent and commitment of the people I worked with – their dedication to excellence and desiring really to do their best and give their all so that we could all bring Jesus to the EXALT21 participants. It was also quite amazing to see how the emcees got together and made it work so perfectly within just one week – from meeting for the first time, to scripting, to eventually just having fun and being free together.

SURPRISES | What was your first thought wrt EXALT21 when the Covid19 cases continued to rise in the week leading up to EXALT21?

Steph: “Jesus, Your problem” Hahaha that is just my “ah lian” response to Jesus. Throughout the process from the moving of the date, to the increased cases, my response was, “Jesus, this is Your project, I surrender to You”.  Jesus showed me that He really works all things out for our good, throughout the uncertainty.

Choo: I was really praying so hard that we would still be able to continue with EXALT21 in-person! The guidelines for a new phase of measures were released (that would have meant that we won’t be able to proceed with in-person sessions) – but it was not yet communicated when exactly they will come into effect. I remember just praying very hard that the measures would not be implemented the day before EXALT21 or something – which would have given us very little turnaround time.

CHALLENGES | What is the greatest challenge that you faced in this process – how did the Lord help to overcome them?

Steph: My personal challenge was just… feeling very stretched. At some point, once the whole production was set in motion, I started being asked questions left and right – questions that I didn’t necessarily have the answers to, and questions I couldn’t have the answers to until I sat down to pray. In this process, I learnt to delegate more, and trust that people were fully onboard with the vision – the same vision that the team had. And most importantly, I learnt to just rely on God’s graces.

Choo: The nature of pubs was that things were always changing. Doing publicity in this climate really kept us on our toes, especially because there were so many different sensitivities involved. Every word and image had to be so carefully crafted to ensure that we were compliant and also sensitive to the Covid-19 situation. While there were many challenges, God truly provided – with people, with the work, He always came through for us, everything fell into place exactly in the way that it needed to. He really gave me the grace to do the things and juggle my plate in ways I never imagined I could.

BEFORE EXALT21 | What was a significant moment for you in the lead up to EXALT21?

Steph: I had a God encounter during one of the core team meetings. I was just sitting there, and everyone in the team was presenting the parts that they were working on. I remember feeling like it was a little dry, especially because all the other parts didn’t quite involve me anyway (e.g., conference platform, IT things I don’t necessarily take interest in…). But then it struck me in that moment – this was a manifestation of the idea that we are one body and many parts. This is exactly how we thrive as Church! I was awakened in that moment and my mind expanded.

Choo: It was witnessing the faith of Ju, OYP’s office manager, the Office and everyone who was involved during the planning of EXALT21. When the regulations changed (several times), and the cases rose, the easiest and most convenient thing that we could have done is just to move it online, or cancel the event. Yet our hearts clung on to the dream that God had placed in our hearts – to draw people to the Him, to create the space to allow the Church to come together again. And when the Lord pulled through and still allowed EXALT21 to happen safely against all odds, I knew for sure that Jesus was holding the fort and gifting us this experience He knew our young people sorely longed for.  EXALT21 as a powerful statement that we can dream big for the church even amidst these times – to not be afraid of the huge amount of effort that is required because God moves and provides!

DURING EXALT21 | What was your EXALT21 moment? How did the Lord move in your heart?

Steph: There were a few moments: I entered the program with this freedom to just enjoy the atmosphere, enjoy seeing the Church gather again, seeing young people worship in freedom. That was a nice moment.

When I went for prayer ministry  at night, I shared with the prayer team that I was very grateful, and I felt very full. I also said this: I am excited to give more. I realised there’s something that just filled my heart deeply about giving in this way.

Finally, when I went for adoration that night, the Lord assured me of His personal and unique love for me and this led me to reflecting and collecting the little things to be grateful for throughout the journey. The faithfulness of God in my own life: When He calls, He sees me through it. I recalled God’s grace that empowered and helped me through the 3-4 weeks leading up to EXALT21 that were so, so challenging.

Choo: I think there were two key moments. I remembered feeling very moved on the Saturday morning when worship began because after so many months, I was in the OYP hall once again with a crowd of people (very safely socially distanced haha) worshipping the Lord.  Although we were not able to sing, I think seeing the body language of people who in their deepest of hearts longed for Jesus and wanted to worship and praise him with all that they were left with really moved my heart. In the months and even hours leading up to EXALT21, we were busy prepping and making sure all that was within our control was in order. But as the opening worship began, there was a very comforting sense of stillness where I was made aware once again of how God was indeed with us and uniting all of us, even those at home, in His one Spirit and rekindling in us our faith that might have gone cold and reviving our hearts that have grown numb.

The other moment was during the evangelistic night when Jesus was first exposed in the Blessed Sacrament… I was standing at the back and I saw every single person on the field bow to Jesus in reverence – seeing that whole field of people worshipping God. I recognized how much people sorely longed for Jesus and desired to be held by Him, and there He was. Seeing Jesus move through the crowds I recalled how in the scriptures Jesus moved and across the villages – meeting us exactly where we are as we took a step towards Him.

We thank you, Steph and Choo, for co-labouring with us to make God’s dream of EXALT21 a reality for the young people of Singapore!