Faithful in the Battle

The Foundation of My Faith

Growing up a cradle catholic, I was exposed to the faith from a young age. However, my faith was lukewarm at best. The turning point of my faith life was during a catechism retreat, where I mustered the courage to go for one of the most powerful confessions of my life. After the confession, a miracle occurred and Jesus revealed to me to choose “Gabriel” as my confirmation name, prompting me to live my life as a messenger of God to the people around me.

Sure enough, after confirmation, I started becoming more active in my faith, being involved in my parish community in Christ the King. I started volunteering every week with Catholic Welfare Services’ Night Mission program, heading onto the streets of Singapore to seek rough sleepers and befriend them. Entering university, I joined the FIDES Catholic Society in SMU. I was in a great place – leading an active faith life, with good grades, taking on leadership roles in my CCAs, contributing actively to serving the homeless in Singapore and extremely happy with God.

During the second semester of university, after a routine medical checkup, one of my family members received the sudden news of being diagnosed with a life-threatening, critical health condition, taking my entire family by surprise. I remember vividly the day we sat at the dining table, in tears at the reality of the situation. At that point, I was also struggling in a long-term relationship, having constant disagreements with my girlfriend. Although painful, I decided to end the relationship, thereby losing a source of support back then.

All my friends know me as one of the most patient people they know, not once seeing me angry. However, being emotionally unstable in trying to juggle all my hurts, coupled with being forced to stay at home due to the Circuit Breaker, it led to a major argument with my father and my punching of a huge hole into a shoe cabinet at home.  Starting an internship at that point of time was emotionally draining, having to appear positive every day.

My string of unfortunate events did not end there. With my friends’ awareness of my plight, they wanted to take me for ice cream to cheer me up. However, upon reaching the shop in a taxi, I opened the door and accidentally knocked over a motorcyclist that had squeezed between the curbside and taxi. The last thing I needed at that point was confrontation.  Unfortunately, the motorcyclist that I had knocked into wanted to fight. I tried to remain calm and focused on settling the insurance claims. However, once my friends arrived, I lost control, breaking down into tears at the roadside.

I did not want to face anyone the rest of that night, so I told my friends to let me be while I walked home. The irony was that while I had been serving the homeless every week for the past 2 years, that night, I was the one who was homeless – sleeping at Bishan Park. That was the lowest point in my life, and I remember saying, “I want to leave this world.”

I signed up for the Combined University Retreat (CUR) 2020 unwillingly, deciding to give God one last chance. On the first day, there was a testimony shared that resonated deeply with me, making me realize that I had been seeking validation through the secular world.

During prayer ministry, God spoke to me saying, “Kenneth, I love you. I love you for who you are, not for your achievements, but just for who you are. You are my beloved son. It’s okay not to be independent anymore and you can turn back to me. Just like the prodigal son, I will welcome you back no matter how scarred you are.”

Feeling overwhelmed, I cast aside all my pride and brokenness, and went straight to a priest for the Sacrament of Reconciliation. I broke down in tears and gave one of the sincerest confessions in my life. I finally felt the sense of peace that I’d been longing for, breaking away from the chain of sin that had held me back from realizing God’s love for me.

During CUR, the image of David & Goliath appeared to me. Coincidentally during mass, the priest shared that it was not the slingshot that defeated Goliath, but rather the faith that David had. 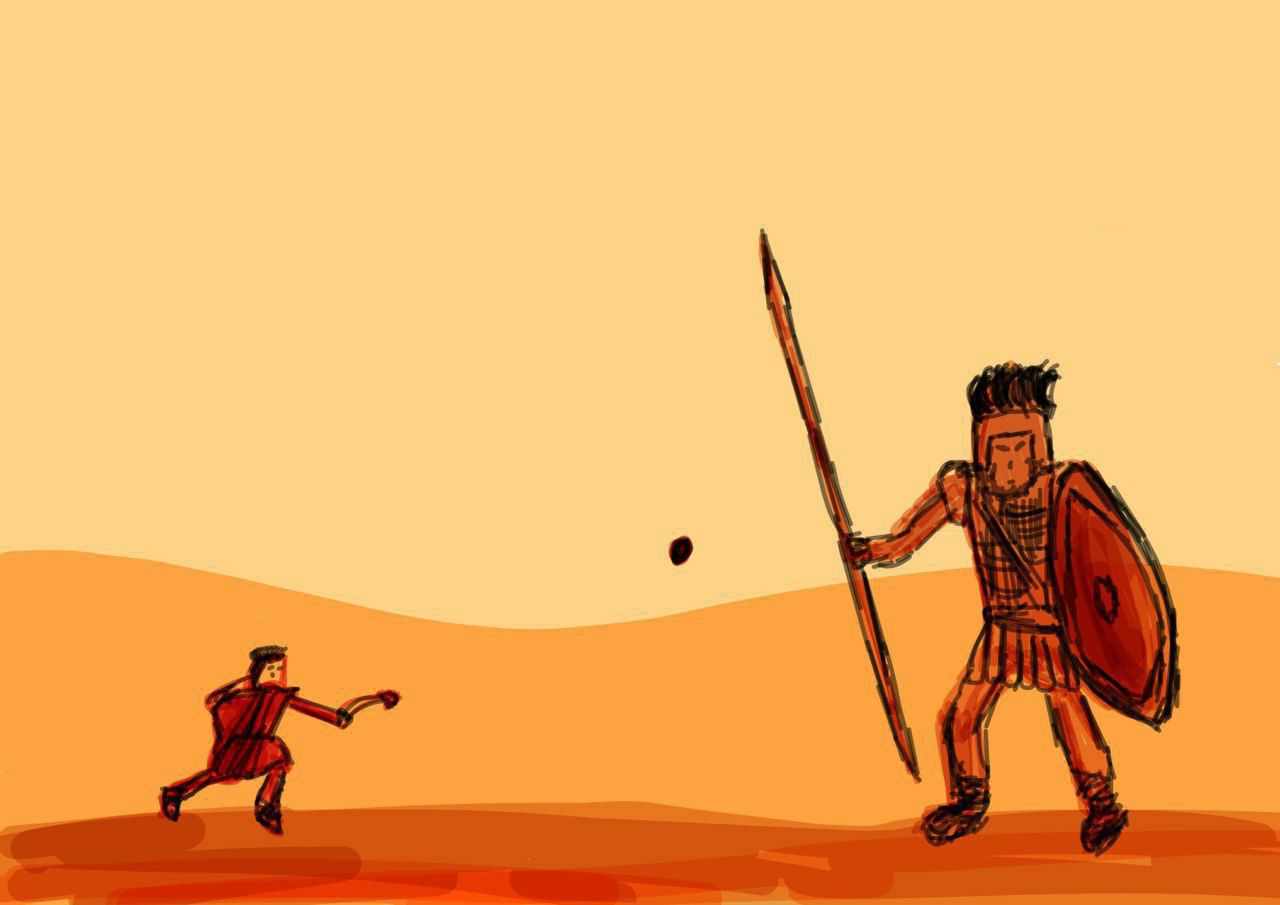 Image of David & Goliath drawn by Kenneth during CUR 2020

6 months since CUR, I can proudly claim the miracles that God has worked in my life after I had placed my complete faith in him. God has provided immense healing for my family member’s condition, mended my broken relationship with my father, and has used me as his messenger to inspire my university and parish community members through the sharing of my faith journey.

I know that I will be facing many Goliaths as I continue in my journey of life, but I am now renewed with the truth that so long as I have faith, with God, nothing is impossible.